LOUDOUN COUNTY, Va. (7News) — A man performed songs and dances for students at Freedom High School in Loudoun County and provided a 15-minute talk about the negative effects of bullying. But, parents say the man provided his Instagram account information to students and encouraged the teenagers to follow him.

Students then discovered an almost naked photo of the entertainer on his Instagram account, parents told 7News.

Some Loudoun County parents reached out to us to express their frustration.

“I don’t care what you do in your personal life,” one parent told 7News. “But he shouldn’t have encouraged teenagers to follow him on Instagram during a school setting if he had provocative, naked photos. That’s uncalled for and the school district should have vetted this man’s public social media posts. This is so inappropriate and Loudoun County Public Schools hasn’t issued an apology to parents and students.”

“I have a student at the school and that student messaged me and said ‘hey mom this is what’s going on at school,’” she replied. “And then he sent me more pictures. And I said that’s a lot why don’t you leave, you have work to make up anyway, why don’t you just leave and do your makeup work. And he said ‘we aren’t allowed to.’ It would have taken 20 seconds for this school to look up this guy what is on his social media account. I think it isn’t appropriate.”

One photo on Instagram shows the performer posing in a bathroom without clothes. The picture is cropped just enough to not display the man’s genitalia. 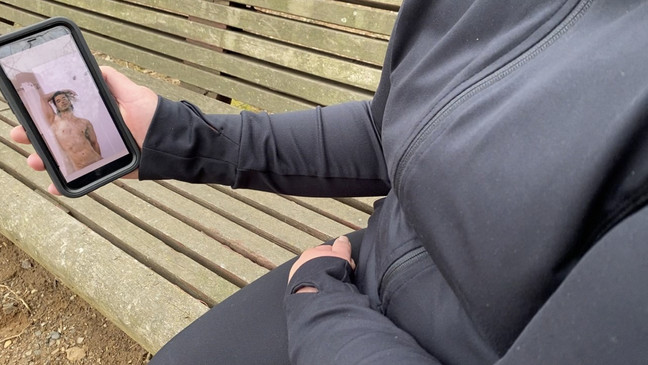 A Loudon County parent showed 7News a screenshot of a photo of an alleged J Dance Crew member she says performed at Freedom High School during a performance.

“He’s fully naked,” the parent said. “It’s obvious that he’s fully naked. His face chest and just about everything except his body parts. It goes down as far as it can go down.”https://platform.twitter.com/embed/Tweet.html?dnt=false&embedId=twitter-widget-0&features=eyJ0ZndfZXhwZXJpbWVudHNfY29va2llX2V4cGlyYXRpb24iOnsiYnVja2V0IjoxMjA5NjAwLCJ2ZXJzaW9uIjpudWxsfSwidGZ3X3NwYWNlX2NhcmQiOnsiYnVja2V0Ijoib2ZmIiwidmVyc2lvbiI6bnVsbH19&frame=false&hideCard=false&hideThread=false&id=1517304027083677696&lang=en&origin=https%3A%2F%2Fwjla.com%2Fnews%2Fcrisis-in-the-classrooms%2Floudoun-county-public-schools-parents-students-perfomer-entertainer-instagram-account-photos-schools-bullying-assembly-freedom-high-school-j-dance-crew&sessionId=9aa2b440ef8e1afe73d8117e86669296219a6bbc&siteScreenName=7newsdc&theme=light&widgetsVersion=c8fe9736dd6fb%3A1649830956492&width=550px

7News learned the performer was employed by J Dance Crew. The performance group told 7News that they were at Freedom High School to talk to students about bullying but said the accusation made that they encouraged students to follow an Instagram account other than the dance crew’s was false.

“J dance crew visited freedom high with our anti-bullying assembly that was positively embraced by both faculty and students. Any inference that students were encouraged to go to any Instagram account, especially one that is not the dance crew’s, is totally false. I do know when we were speaking with [the] administration before our visit they mentioned how students at Freedom had begun to interact and bully each other online with both racist and bigoted terms and it appears to me that this is a much bigger problem than they thought, as evidenced by the incorrect information you have been given regarding our program and the work we do. During our program, I encouraged the students to treat themselves with respect and respect everyone they meet. It’s unfortunate that message has gone unheeded. I will continue to pray for the students and faculty of freedom as they deal with their bullying problem that seems to not only affect those within the school but even those who visit the school as well. Have a blessed day. “

In a note to parents, LCPS’ Neelum Chaudhry said:

“Today the Freedom student body viewed a performance by J Dance Crew, which has appeared at more than 2,000 schools nationwide. This program included a 30-minute dance performance followed by a 15-minute talk about the negative effects of bullying and the need for students to respect themselves and one another.”

“This performance was vetted by Freedom’s school administration and Loudoun County Public Schools’ central administration. There were no incidents of inappropriate conduct or content during today’s performance. This event was part of a celebration of the beginning of the fourth academic quarter. Students had requested a special event to mark this milestone.”

“After the performance, some Freedom students discovered provocative images of one of the performers on a private social media channel and it was brought to our attention immediately. I wanted you to know that Freedom’s administration was not aware of these images before this program was booked.”

The man’s Instagram account was public before and during the performance. His Instagram profile is now set to private.https://imasdk.googleapis.com/js/core/bridge3.512.0_en.html#goog_515403200 seconds of 0 seconds Volume 90% A parent tells 7News about her concerns after students discovered a provocative photo on the social media account of a man who had just performed at their school.

Instagram has a new chronological mode. Here’s what you need to know

Disney Plus – How to Sign Up and Begin Watching

Instagram has a new chronological mode. Here’s what you need to know